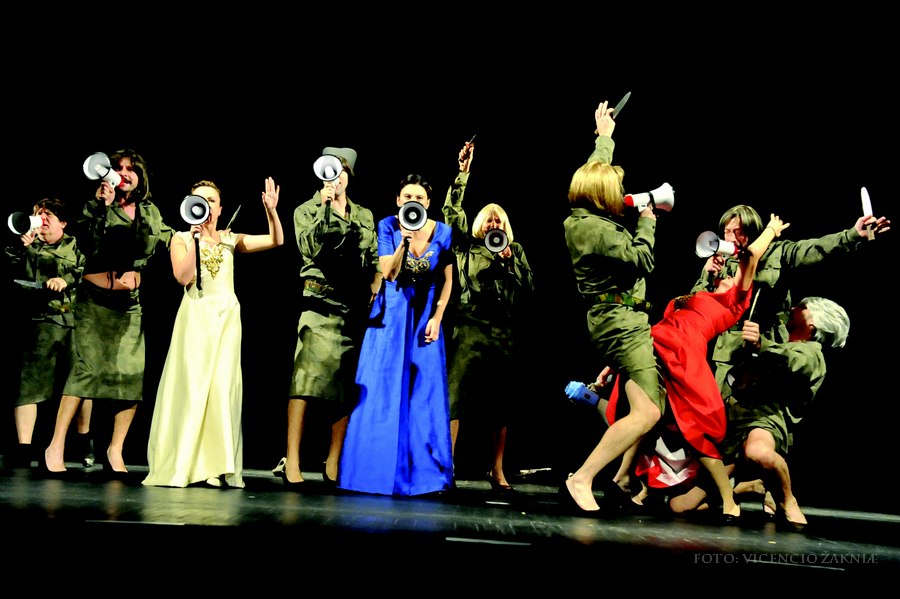 In 1848-49, the flames of revolution begin to flare up all over Europe. Hungary rises up against the Habsburg Empire in the hopes of winning independence, but at the same time, the patriots of the Serbian Principality, which belongs to the territory of Hungary, demand a new language law and proclaim the Serbian Voivodeship (“Srpska Vojvodina”), which neither Vienna nor Budapest recognizes. A series of battles breaks out between Hungarians and Serbs in the region.

Popović’s play, a biting comedy and a classic of Serbian literature, satirizes Serbian nationalists. András Urbán’s stage resounds with the echoes of debates among wise people who refuse to take sides, fervent patriots, and shrewd careerists all too ready to make prudent compromises. Music that strikes the tone of proclamations and manifestos blends with cries of “war! War,” cries which are followed all too rapidly by acts. For the era of insight, understanding, and reconciliation is still distant, as indeed is illustrated perhaps most clearly by the simple fact that the play was first performed in the Serbian National Theater on December 30, 1904, over half a decade after it was first printed, at the specific request of Popović himself.

Andraš Urban was born in Senta in 1970. As a seventeen year old, he establishes an independent theatre and literary workshop as an author, director and actor. Later on, he establishes a theatre troupe ‘Aiowa’ (aiowa maffia), which treats the theatre as a specific and yet all-art-included ideological action. He starts studying directing at the Academy of Arts in Novi Sad, under mentoring of Professor Vlatko Gilić, where he studies film and stage directing; he directs plays in the National Theatre in Subotica. At the beginning of 1990’s he leaves the university, stops directing in theatre and then lives in seclusion for years.  Urban graduates in stage directing in 2000, mentored by Professor Boro Drašković, and again intensively works in theatre. With support of MASZK from Szeged and his own ensemble (The Andraš Urban’s Ensemble) he produces independent theatre performances. Since 2006, he has been a Manager of Hungarian Theatre ‘Dezso Kosztolany’ in Subotica. He is a founder of an International Theatre Festival ‘Desire Central Station’. He directed plays in Subotica, Niš, Novi Sad, Belgrade, Szeged, Bitola, Ljubljana, Berlin, Cluj, Varna, Maribor, Rijeka. He has directed about 40 productions. He sees the theatre as an enlightened space for, sometimes, provocative action, where one thinks, speaks and organises a specific vision of creative reality. A production is, in his opinion, a communication and the other reality, which exists in its own right, but is created and presented in relation to a performer, presented reality and a viewer. His stage directing is implemented through interactive communication with an actor. Andraš Urban won the Jaszai Mari Award (the most prestigious award in theatre art in Hungary), Joakim Vujić Award, Pro Urbe of the City of Subotica, Pro Urbe of the City of Senta, Award for Parallel Art (Mediawave). His stage directing and productions won awards at the Festival of Professional Theatres of Vojvodina, Sterija Festival, Infant, Joakimfest, Fortress Fest, Teatarfest, Festival of Alternative Theatres of the Republic of Hungary, Festival of Hungarian Theatres, Bitef, Mess, MOT, the Days of Satire – Zagreb