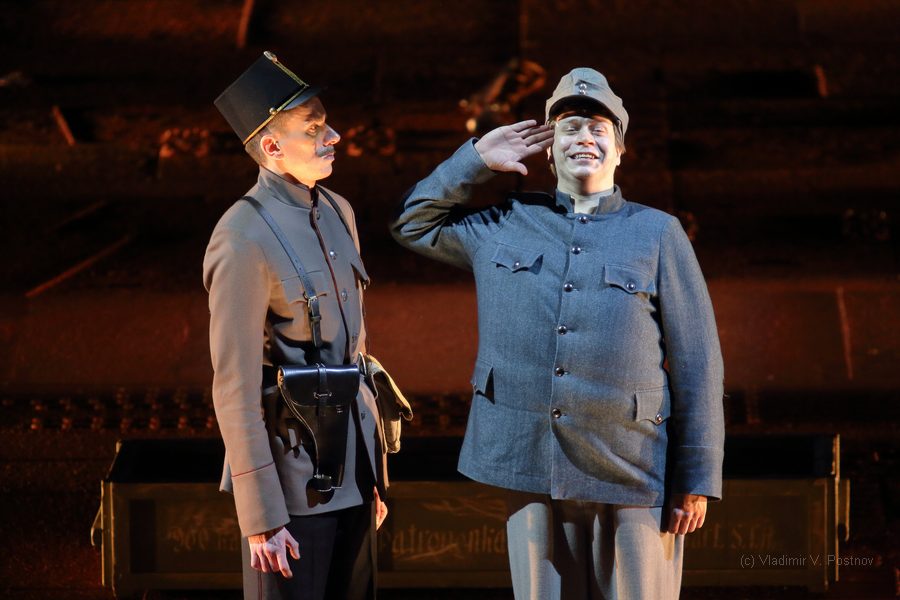 "Švejk. The return" is a new performance of the Artistic Director of the Alexandrinsky Theatre, one of the leaders of the modern world directing - Valery Fokin. The literary basis of the performance - the original play by Tatyana Rakhmanova, based on the world-famous satirical novel by Yaroslav Hašek "The Fateful Adventures of the Good Soldier Švejk During the World War". The performance became the first stage embodiment of this play.

The novel that appeared at the very beginning of the 1920s gave one of the most famous folk heroes to the world - Švejk, a small man trying to survive in the flow of events of the First World War. The performance of Valery Fokin is a modern rethinking of this age-old history. Who is Švejk of the 21st century? An involuntary participant of many wars, embroiled in confrontation of all with everyone, still trying to survive and retain common sense in the absurd reality - today, without losing its grotesque simplicity and naivety, he becomes a real hero of our time.

The performance "Švejk. The return" is a funny story, a satire, where, however, very important questions are raised for us - about peace and war, about the relationships between the man and the state, about the personal responsibility of everyone for what is happening in the world. And the theatre is now ready to talk about the war in the caricature tradition created by Hašek and at the same time rigidly and uncompromisingly.

The performance by Valery Fokin based on the novel by Yaroslav Hašek. "The Fateful Adventures of the Good Soldier Švejk During the World War". The play of Tatyana Rakhmanova. 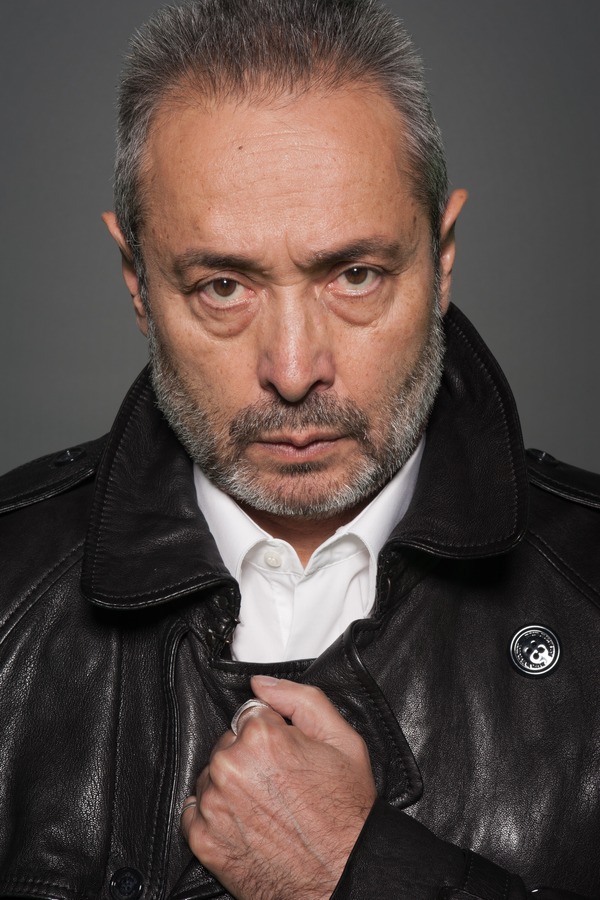 People's Artist of Russia, winner of four State Prizes of Russia, Honored Art Worker of Poland. Since 2003 he has been the Art Director of Alexandrinsky Theater. Since 2006 - member of the Presidium of the Presidential Council for Culture and Art. President of the V. Meyerhold Theatrical and Cultural Center - since 2011. Chairman of the Guild of Russian Theatre Directors 2012-2020.

Valery Fokin has received numerous Russian and foreign awards and prizes, the most recent being the Order of Merit for the Fatherland, First Class - "For Great Contribution to Development of National Culture and Art, Lengthy and Fruitful Activity," the Order of the Rising Sun, Golden Rays with Neck Ribbon for his contribution to development of the Japanese-Russian cooperation in theatrical art, the French National Order of Arts and Letters.

From 1985 to 1991 he was the head of the Moscow Theatre named after M. N. Ermolova. The first productions of the young chief director put the theater among the most popular.

According to unanimous recognition of the press, the first program for Fokin at the Theater of them. Yermolovaya Theatre, the first production of Fokine's play Speak Out... was to mark a turn to a new theatrical way of thinking in the Russian theater. For this performance in 1987, Valery Fokin was awarded the State Prize of the RSFSR in the field of literature and art.

From 1975 to 1979 he taught at the GITIS (Moscow State Theatre Institute), and from 1993 to 1994 at the Cracow High Theatre School (Poland) and the Toen Theatre (Japan). Led master classes at European directors' courses in Spain, Sweden and Bulgaria.

Valery Fokin has been the Chairman of the Commission on the Creative Heritage of V.E. Meyerhold since 1988. In 1991, on the initiative of the Commission on Creative Heritage of V. Meyerhold and with the support of the Union of Theatre Workers of Russia and the Union of Architects of Russia, the V. Meyerhold Centre was established. The CIM was given the status of a state unitary enterprise by the Moscow Government in 1999. In 2000 Valery Fokin was awarded with the State Prize of Russia for educational activities - for preserving, studying and developing the artistic heritage of V. Meyerhold and creating the V. Meyerhold Theatre and Cultural Centre". The new CIM building was opened on February 12, 2001. Valery Fokin was the Director and Artistic Director of the CIM from its foundation until September 2011, and has been its President since September 2011.

In 2002 he staged Nikolai Gogol's “The Inspector General” at the Aleksandrinsky Theatre (together with the CIM), the play was awarded the State Prize of the Russian Federation, the

Golden Mask Award of the Russian Federation, and the Golden Sofit Award of the St Petersburg Theatre. Since 2003 he has been Artistic Director of the Alexandrinsky Theatre.

He has presented about a hundred theatrical productions in Russia and abroad.

During the years of his artistic direction V.V. Fokin has become the artistic director of the Alexandrinsky Theatre. Over the years of Fokin's artistic management Aleksandrinsky theater became the leading dramatic theater of Russia, initiating a number of large-scale national and international projects.