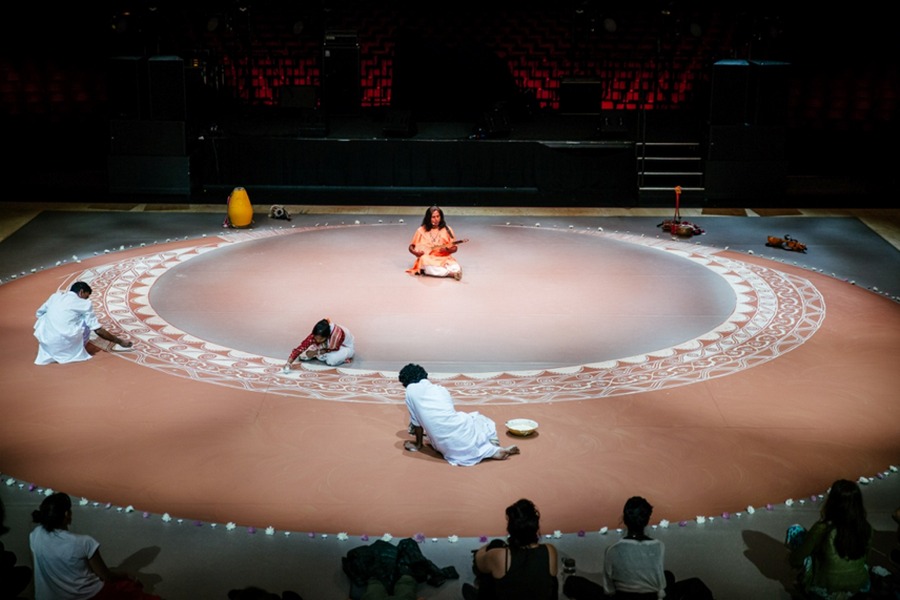 The Group of Parvathy Baul, India

Performed In Bengali with Hungarian subtitles.

This presentation offers an unique synthesis of two different artistic dimensions: she show a gradual emergence of Álpaná motifs accompanying the Baul songs which express myraid hues of emotions with central essence as longing for the Divine. Baul is mainly an oral tradition – intrinsically connected to the practice of Yogis, Sufis and Mystics – which serves to living wisdom of speaking songs of great saints. It has been practiced and performed through generations since thousands of years, and continues even today. This living tradition of Musical Mystic Practice is evolving everyday through the contributions of contemporary BaulSadhakas (Baulpractioners) of Bengal. Her mission is the purpose of remembering, recognizing the flower of universal love which blossoms in everyone’s heart, devoid of caste, class or religion or any kind of human made boundaries.

Baul songs are mostly composed in simple colloquial Bengali. These poems were written in an unusual language expression, known as SandhyaBhasha or twilight language. Poems written in the style of SandhyaBhasha brings together many layers of subtle meaning written behind the transparent veil of simple metaphor of normal daily village life – of nature, or of human love. This language is also known as the hidden language. The great indian poet from 20 century, Rabindranath Tagore (well-know in Hungary), admired the Baul’s poesy, and he has done a lot to introduce it in the literary life.

The Álpaná refers to colourful motifs, sacred art or painting done with hands and paint which is mainly a paste of rice and flour on auspicious occasions in Bengal. The word Alpana is derived from the Sanskrit alimpana, which means 'to plaster' or 'to coat with'. Traditionally, it was drawn by the women of the house before sunset. In the performance a several meters wide Álpaná will be drawn on the floor by three Álpaná artists over the span of two hours, and the audience will be invited in the conclusion to offer their own motifs in the center.

Even the music ensemble comprises of one-stringed instrument Ektara and rhythm instruments, each with hundreds of years of traditional continuation. All the performers are masters in their own right bring to the presentation authentic experience of the Baul sound. In Sama Veda, we find Ektara, which is a symbol of Oneness, like the single ray of the Sun when it touches earth and this Union, giving birth to newness. The sound of Ektara is imagined as the sound of ” AUM”. This is also known as AnhatNaad, or unstruck sound. Parvathy Baul’s ars poetica is the same as she had heard from her Guru, Shri Sanatan Das Baul ‘we are only the bearers of Ektara; this Ektara only decides – it travels, sings and meets people, we only carry it to different places, I found so much endlessness in one string, that, it is enough for me to cross my life with this single string’. 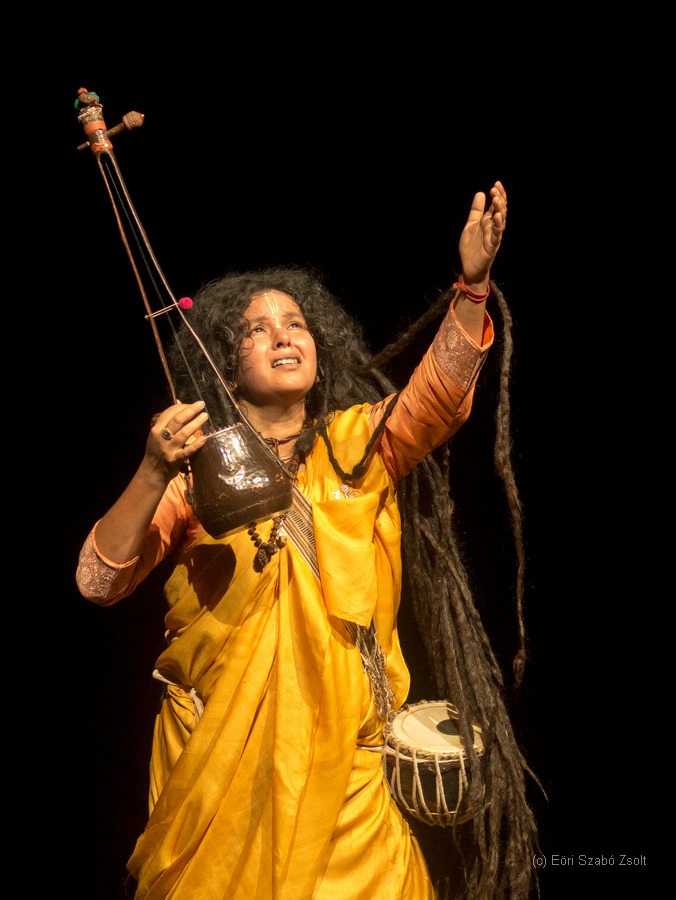 PARVATHY BAUL As the most recognized woman Baul performer in the world, Parvathy Baul is a practitioner, performer and teacher of the Baul tradition from Bengal, India. She is also an instrumentalist, storyteller and painter.

Parvathy’s technical virtuosity – her mastery of vocal pitch and tone while playing multiple instruments and dancing – has been lauded by music experts. The depth of her mesmerising performance is rooted in her deep spiritual practice, and is described by critics as “riveting” and “spellbinding.”

The Baul tradition dates back to the early 8th C. AD and has grown weaving together threads from Sahajiya Buddhism, Turkish Sufism and Bengali Hinduism. This powerful musical form has been recognised as a “Masterpiece of the Oral and Intangible Heritage of Humanity” by UNESCO.

Parvathy’s performance work emerges from a long lineage of master Baul singers, dancers, and spiritual teachers. She studied closely with two of the most respected Baul singer-gurus of the previous generation, Sri Sanatan Das Thakur Baul and Sri Shoshanko Goshai. She was recognized by her gurus as both a musical and spiritual teacher in the Baul tradition, carrying forward their spiritual legacy.

She has performed in over forty countries, including such prestigious concert halls and music festivals as the Noh Theater in Kyoto, the World Music Center in New York City, and the Festival of World Sacred Music in Fez, Morocco.

She is a tireless advocate for both preservation and renewal of the tradition, frequently using her international reputation to highlight other, lesser-known master performers, and is making systematic training in traditional Baul arts available to women on a scale that has never occurred previously.

Parvathy has recorded five CDs of music and published a book on the Baul tradition through Ekathara Kalari, her non-profit institution promoting ancient Indian spiritual traditions, with an emphasis on Baul arts and practice.