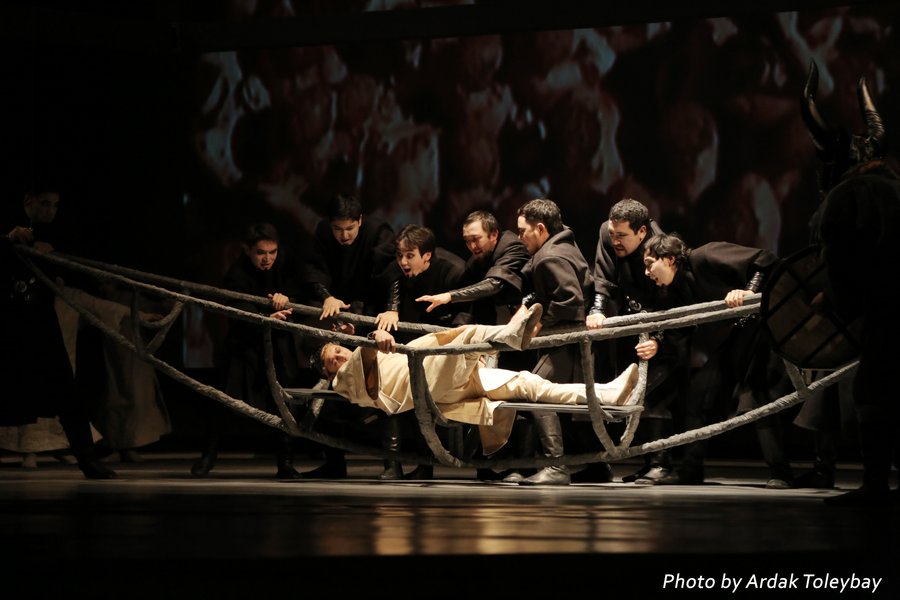 Performed in Kazakh, with Hungarian and English subtitles.

Korkyt, the hero of the story is neither god nor a mere mortal. He is a traveller, an intermediary between Heaven and Earth just like Hermes, the guide of souls, in Greek mythology. However, he is also characterized by the personality-cult of European Romanticism, the symbolic figure of which is Prometheus, the Titan squabbling with the chief god. Contemporary dramatist Iran-Gaiyp places in the centre of the plot the motif of Turkic mythology well known from Hungarian folk tales as well: man’s desire for immortality. Korkyt wakes up to the true nature of immortality when the dead, lightning-blasted tree comes to life under the blows of his axe and starts to sing in the voice of souls. It is the result of this experience that Korkyt creates the national instrument of the Kazakhs, the kobyz, which still embodies the cohesive power of this young nation, independent since 1991. It is the spiritual mover which Attila József summarised to us, Hungarians, so in 1928: "Nation is shared inspiration".

“In one of the stories originating from the region of the River Syr Darya, the wise Korkyt first lived in a hidden corner of the world. One night, he dreamt of a few men digging a grave. When he asked them who they were digging the grave for, they answered they were digging it for the wise Korkyt. When Korkyt woke from his dream, he decided that he would run away from death, so he fled to the other end of the world. There he saw the same dream, so he decided to move, this time to the center of the world. This is how he got to the River Syr Darya, where he had the same dream again. He concluded that he was not to live on the earth, so he took off his sheepskin coat, lay it on the river, sat down on it and lived this way for another 100 years. /…/ According to another legend that spread among Kazakh people, Father Korkyt was a poet of folksongs, and he invented the cobza and the tambura. For the Kazakhs, the main difference between the two widely-used folk instruments is that cobza is a bow instrument, while the tambura’s strings are usually plucked. The legend thus claims that Father Korkyt was the inventor of all stringed instruments. When the Kazakh shamans play the cobza, their song is a prayer to their teacher, Father Korkyt, for help. /…/ One image often used in Kazakh folksongs is a simile in which the young lover boy compares his beloved’s eyes to ‘a light lit by Korkyt.’” (Imre Adorján)

According to the creators of the production, The Legend of Korkyt is a requiem for civilization, culture, the arts, and kuyi (traditional Kazakh instrumental musical genres), and also for notions of the holy and the spiritual.

The Legend of Korkyt is the life of the universe, the fusion of religions … Directed by the legendary Lithuanian master, Jonas Vaitkus. 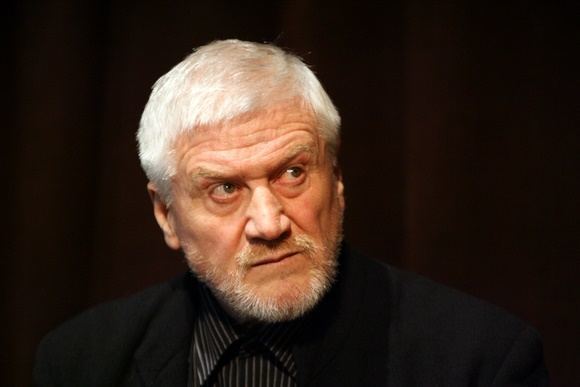 Jonas Vaitkus (born May 20, 1944 in Lithuania) is a lecturer, theatre and film director. From 1969 to 1974 Jonas Vaitkus studied at the State Theatre, Music and Cinematography Institute of Saint Petersburg. From 1977 to 1988 he was the artistic director of Kaunas State (Academic) Drama Theater, and from 1989 to 1995 was the artistic director of the Lithuanian National Drama Theatre. A winner of various awards throughout his career, Jonas Vaitkus has directed many films and more than 60 plays. Jonas Vaitkus has mentored a number of actors and directors, including director Oskaras Koršunovas and actress Ingeborga Dapkūnaitė, both of whom are well-known internationally.