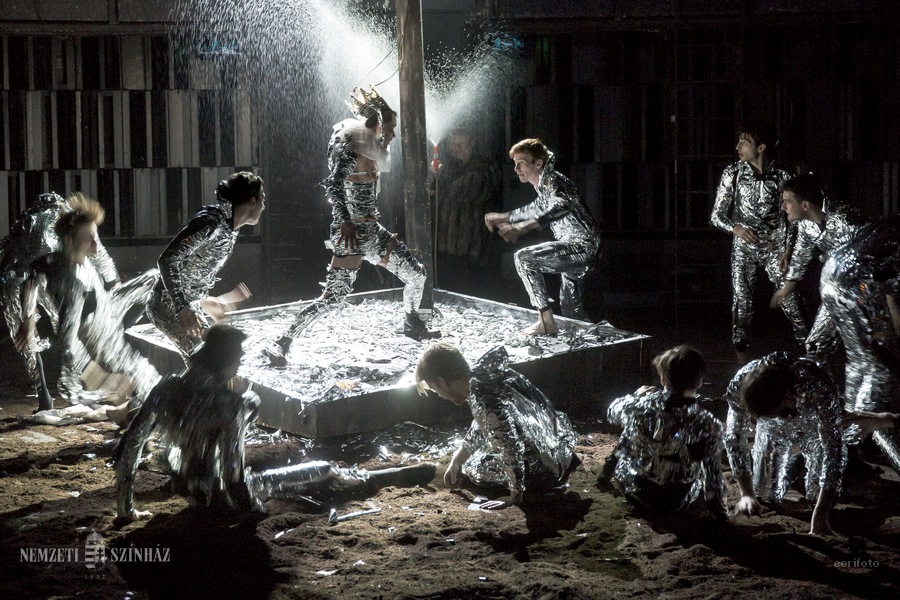 At the MITEM performed in Hungarian with simultaneous interpretation in English.

Richard fought against the French as a hero because he believed in his country. Then when “peace” arrived, he was removed from the cover pages. Society showed little interest in or commitment to the values for which he had fought for decades. He fought, he won, but he lost it all.  The people shout, “hurrah, peace has come!” There is only one man who, staring at his own distorted shadow, stops to ask, “is this really peace?” He is left alone. He loathes the world, and he spits on custom and is horrified by the thought of boredom. So he makes a decision: he is going to play…

The figure of Richard III is usually interpreted as the archetype of a Machiavellian, modern-day dictator. According to the creators of the show, however, Richard III is a much more complex Shakespearean figure, since his acts are the consequences not of a freely-made decision deriving from boredom, but rather of a world in which “one can only be evil.”

Thus, the question here is not why man becomes so evil, but rather what kind of world do we live in that man can become so evil.

Along with some of the actors, the director and translator, Attila Vidnyánszky Jr. and Miklós Vecsei, represent the youngest generation, and the are working together with some of the greatest names in Hungarian theatre today:  Enikő Eszenyi, Géza Hegedűs D., and Zsolt Trill in the title role.

Attila Vidnyánszky Jr., Miklós Vecsei
Attila Vidnyánszky Jr., who was born in 1993, and Miklós Vecsei, who was born in 1992, completed their studies in directing at the Academy of Drama and Film in Budapest in 2015, where they studied under László Marton, Géza D. Hegedűs, and Péter Forgács. Vidnyánszky has been given prominent roles, for instance in productions that were performed in the Comedy Theatre of Budapest and the Hungarian National Theatre.
Vecsei played several roles in productions that were performed in the Csokonai Theatre in Debrecen, and at the moment he is a member of the theatre company of the Comedy Theatre of Budapest. Vidnyánszky and Vecsei worked together on performances as university students, and after having completed their studies, they brought contemporary interpretations of classic works of the theatre to the stage in the Radnóti Theatre, in Budaörs, and in Debrecen. Their most important performances include roles in Ede Szigligeti’s Young Lilly, Bulgakov’s Ivan the Terrible, and Shakespeare’s Timon of Athens. They have given their theatre formation the name Stalker Group.
Richard