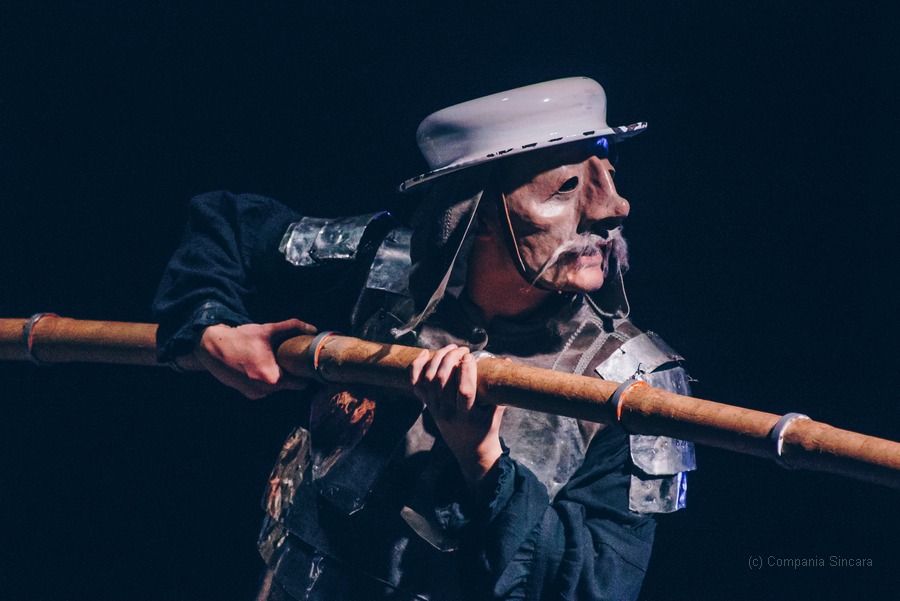 “…lances will be broken, faces distorted, horses will be saddled, cakes buttered, deaths will be died, ideals have been dreamt to their conclusion.”

In a time in which visionaries, equipped with post-factual theories and alternative realities, gather their supporters around themselves. Thusly, in a time in which ordinary humans rise to become heroes, in order to beard waves and currents, create islands of safety, in a time, in which encounters with death and devil might lurk behind each and every corner and the Occident girds itself. Thusly, in a time, in which deceptions and superstitions have real consequences, in which people are mistaken for live-stock. In a time, in which true love – usually seemingly distant – can only become a reality in hotly anticipated tango nights. In this time – naturally, the time of peasants and knights – in this time, it seems like as if everything was not too far away from today.

The stage is a place for dreamers and true realists – in the best case they share the stage that makes so many worlds. The unlikely pair of figures: Don Quixote and Sancho Panza show us, how important dispute and exchange are and that persisting is no alternative when fronts stiffen. Get in gear!

Why flying wooden horses and masked faces, laments, butter cakes and the Spanish Mancha tell something about us and the current strays, as well as, more importantly, why the opinion of a good friend can mean rescue, even if this friend seems to live in another world – this is what DON Q portraits as vivid as never before!

A plea for the paradox, a broken lance for the dialogue beyond good and evil, beyond life and death.

Compania Sincara is a theatre collective (founded in 2016) based in Leipzig, Germany, and is characterized by its comedic and poetic mask and figure theatre. The core of its theatre work is a balancing play with the complements of humanity. In doing so, the company seeks new and old, experimental and historic narrative- and acting styles. In times of social change and lack of utopias the theatre makers want to entice the audience to think about new ways of thought – in an openly communicative manner, closely related to the audience. They think of themselves as European theatre makers and do not limit their performances to Germany. Their play style is fluent, occupies different spaces, breaks through the boundaries of genres and cannot easily be attributed to definite categories. However, one thing is for certain: their theatre is political.