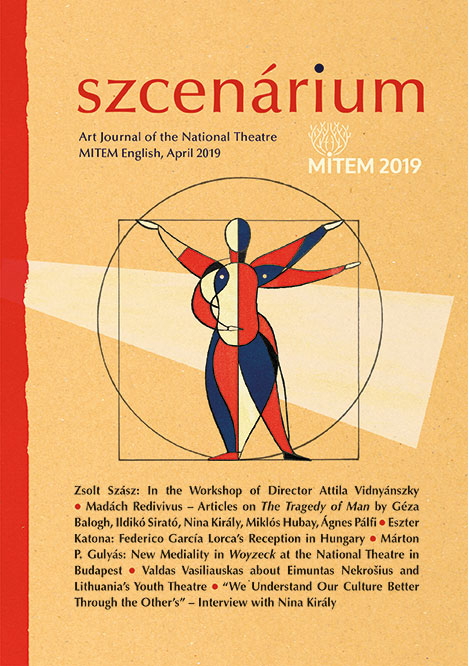 ATTILA VIDNYÁNSZKY: “Adam, as a Young Man Again”  ZSOLT SZÁSZ: New Dramaturgy on the Stage of History. In the Workshop of Director Attila Vidyánszky  GÉZA BALOGH: Productions of The Tragedy of Man at the National Theatre during and after the Dictatorship  ILDIKÓ SIRATÓ: The Tragedy of Man in Foreign Languages and on Stages  NINA KIRÁLY: The Tragedy of Man or Mankind?  MIKLÓS HUBAY: The Crystal System of the Drama  ÁGNES PÁLFI: The Pregnancy of Feminime Vigilance. A Reading of the Eskimo Scene  ESZTER KATONA: Federico García Lorca’s Reception in Hungary and the Succes of The House of Bernarda Alba  MÁRTON P. GULYÁS: Shrinking Spaces. New Mediality in Woyzeck at Budapest’s National Theatre  VALDAS VASILIAUSKAS: Eimuntas Nekrošius and Lithuania’s Youth Theatre  “We Understand our Culture Better through the Other’s”. Interview with Theater Historian Nina Király

“Every dictatorship regarded Madách’s dramatic poem [The Tragedy of Man] as dangerous. When Antal Németh directed it at the Hamburg Staatliches Schauspielhaus in 1937, the Admissions Committee wanted it banned, because it considered the Phalanstery Scene an open attack on the idea of national socialism. It relented after a lengthy debate, on condition that the ominous Scene XII include inscriptions in Cyrillic as a reference to the Soviet Union. The communist one-party state did not dither as much: it simply commanded the play off the stage.” (Géza Balogh)

“García Lorca’s last play, The House of Bernarda Alba, finished a few weeks before his death, premiered on the Hungarian stage in 1955. It was presented at the József Katona Theatre, under extremely interesting circumstances. Namely, the troupe had been preparing to perform László Németh’s play Galilei, but the censors withdrew their approval at the last minute. Director Endre Marton was forced to make a quick decision and he chose to present García Lorca’s play instead, with the ironic result that a play banned in Spain for decades got the green light to stand in for a Hungarian author’s freshly banned play.” (Eszter Katona)

“We can now only simulate orgy and liberation, at most we can pretend as if we were moving in an unchanged direction with an accelerated speed, but in fact we are accelerating in emptiness, because all the goals of liberation are behind us, and we are suffering from knowing that all results are known in advance, for we are in the possession of every sign, every form, every desire. (…) Art has failed – following the aesthetic utopia of modern times – to become an ideal way of life (…) It has got vanished not in any kind of transcendent idealism, but in the general aestheticism of everyday life, it ceased to exist so as to hand over its place to the mere spreading of images in the quotidian transesthetics.” (Jean Boudrillard)

“If we shrink the world, if everything is within reach, then (...) we will be infinitely unhappy because we have lost the true place of freedom, the spaciousness. (…) The space of freedom is shrinking with speed. However, freedom needs space. Before, freedom of movement was thought to lead to infinite freedom. [But] this is not true; beyond a certain limit, the dictatorship of movement occurs; the self-exhausting, tormenting offensive.” (…) (Paul Virilio)

“«There is nothing wrong with mankind as to its biological essence. Its élan vital (’vital impetus’) would still shoot it in the air as a well-strung bended bow would an arrow», writes playwright Miklós Hubay, my first theatrical mentor in Hungary, in his commentary on the London Scene in his book on Imre Madách. This is the last historical scene in Az ember tragédiája (The Tragedy of Man) with mankind being on the verge of acquiescence in the final exhaustion of its physical, intellectual and moral reserves. Eve alone, the First Woman, opposes collective suicide: «Dismal abyss, gape at me, since you must, / but I’m undaunted by your fearsome night; / what tends towards you is but earthly dust - / look, I traverse you on a shaft of light!»” (Attila Vidnyánszky)