Before the Tadeusz Kantor’s Retrospective Exhibition

It is a well-known fact that in a theatre everything happens hic et nunc and in spite of the development of the contemporary media the recordings cannot really substitute the excitement, the sadness or the admiration that can be the results of direct encounters between the actors and the audiences. That is the main reason why it is an important task for the participants of productions, primarily for theatre historians to prepare precise descriptions of theatrical events and also to position them in a narrower ethnical or a broader international context. This is the only way how created values can be preserved, the continuity of traditions can be secured and the old and new means of periodical explorations can be taken into account. This is how it is referred to in the first lines of the manifest titled To Save from Oblivion by Kantor:

Personal confession…
an unusual and rare
technique today.
In our epoch
of increasingly collective life,
a terrifying growth of collectivism,
a rather awkward and
inconvenient technique.[1]

However, these lines and the titles of his lectures make us conclude that the Artist’s individual fate is inseparable from historical events, eternity, and the great questions of life and death in Kantor’s art.

However, these lines and the titles of his lectures make us conclude that the Artist’s individual fate is inseparable from historical events, eternity, and the great questions of life and death in Kantor’s art.[2]

In 2015 in Poland and all around the world the one hundredths anniversary of Kantor’s birth and the twenty-fifth anniversary of his death was celebrated. These anniversaries coincide with the date of moving Kantor’s museum, the Cricoteca to a new building on the bank of the River Vistula, where this collection was moved from its former location at 5 Kanonicza which is situated below the Wavel. Now the new museum provides enough room for a permanent exhibition. For the jubilee several valuable monographs were published which are dedicated to various periods of the Kantor career. The most exciting publication seems to be the dictionary of Kantor’s artistic terms (Katarzyna Tokarska-Stangret: Pokój wyobraźni. Słownik Tadeusza Kantora. Warszawa, 2015).

One of the most prominent artists of the Polish and European avant-garde celebrated his 75th birthday in 1990, just a few months before his death, and at the same time the 35th anniversary of the CRICOT 2 Theatre, which was established in 1955 by Kantor. It is an interesting numerological observation that while in Jerzy Grotowski’s life many important events are related to number six, in Kantor’s life number five seems to be significant. What is common in both of them is that in Hungary neither Grotowski’s, nor Kantor’s productions could be watched by the audience. Therefore the exhibition opened on 14 March 1990 in Budapest Gallery is of great importance as Kantor’s drawings and theatrical objects were displayed there. Kantor visited Budapest in November 1986 while he was going from New York to Thessaloniki and he met the representatives of theatres and fine arts as well as some students in the R Club of SZKÉNÉ Theatre (the script of the interview may be read in Kultúra és Közösség (Culture and Community) 1987/1); at the same time Kantor gave a short interview to the Stúdió programme on television). Following this there were a lot of exchanges of letters between the CRICOT 2 and Katona József Theatre in order to organise a tour, however, due to financial reasons this plan did not come off. Kantor took delight in sampling his childhood favourite strudli (strudel) in the Buda Castle. The reason why he reminisced of the delicacy is that Wielopole, the town where Tadeusz Kantor was born on 6 April 1915 used to belong to the Austro-Hungarian Monarchy.

The Színház (Theatre) periodical published the formerly mentioned Manifest by Kantor under the title To Save from Oblivion translated by Jolán Cservenits in May 1990; also the description of 35 episodes intended to be the a “guidance” to the score of the production I Will Never Return as well as my essay, The Krakkow Ulysses about the international conference which was held between 9 and 11 April at Jagellonian University, where Kantor wanted to show his last play Today is My Birthday to the international audience. This was meant to be the first Académie Expérimentale des Théâtres session dedicated to Kantor.

In the 1990/4 issue of the Kultúra és Közösség (Culture and Community) some very interesting materials were published In memoriam Tadeusz Kantor 1915–1990. This is also where the famous interview with Tadeusz Kantor on January 25, 1990 press conference was recorded with the significant sentence of “I rather believe in art than in life…”. Kantor and the European Avantgard by László Beke was also published here. László Beke must have met Kantor’s actors in Paris, and even with Kantor in 1976; some time later he had the opportunity to view a live performance of The Dead Class. István Eörsi wrote a memorable essay about this production in ÉS. According to László Beke – who was close to Miklós Erdély’s circles – if the Hungarian audience could have been introduced to Kantor’s works any earlier it could have made a great impact on Hungarian art. Analysing the 60-s and 70-s László Beke has identified a lot of common features; for instance one of the most important expressions in Kantor’s manifests “the hole in reality” is very similar to the definition of art as an “empty place” in the Marly-i tézisei (Theses of Marly) by Miklós Erdély.

There is another example for a similar comparison, the dialogue between Andrzej Wajda and Miklós Jancsó published in Dialog periodical (1972), in which Wajda raises the question: How could it be explained why in both of their cases their very first movies (Ashes and Diamonds, Kanal by Wajda and Szegény legények (The Poor Outlaws), Csillagosok, katonák (The Red and the White) were crowned with the greatest success abroad while these productions were all models of the Polish as well as the Hungarian historical developments. According to Jancsó the irregular and stormy history in Central Europe results in an unimaginably intense form and an ultimately concise expression of basic existential situations and these situations highlight the eternal and general tragic aspects of humanity which can hardly ever be so palpable in the civilizational transmissions of “normal” Western European development models.

The closing lines of Kantor’s above-mentioned manifest also coincide with this, but here they refer to the stage:

I am onstage.
I will not be a performer.
Instead, poor fragments of my own life
will become
“ready-made objects”
Every night
RITUAL
and SACRIFICE
will be performed here.

It has been a very special gift in my life and my teaching career that for five years from 1984 to 1990 I could work as a visiting professor at the Theatrology Department in the Jagiellonian University in Kraków. This was the period of time when Tadeusz Kantor was preparing his last three productions: Let the Artists Die; I Shall Never Return; Today is my Birthday. I could follow up all the rehearsals at Cricot 2, moreover I had the opportunity to take part in conferences in Italy and France, and also to attend symposiums and exhibitions dedicated to Kantor in Poland. Furthermore, there were a few times when even Kantor himself showed me his favourite paintings and commented on them in the Museum of Krakow. It was great pleasure for me when – since Kantor had decided to abdicate his publishing rights – I together with László Beke managed to edit and then with the co-operation of MASZK Association in Szeged we managed to publish Kantor’s scripts under the title Death Theatre in 1994, on whose cover both the hand-drawing and the main title are created by Kantor.

The Kantor Exhibition which is being prepared for this year’s MITEM will hopefully attract great interest as it was he and Jerzy Grotowski who determined the development and poetics of the second half of the 20th century theatre perhaps to the greatest extent.

In this grand exhibition at every level of the Budapest National Theatre there will be displays of photos, pictures, video recordings of productions from Kantor’s various periods of art: the “informel”, the “impossible”, the “zero” and the “happening” theatre. Owing to our Polish partners – the Cricot Museum and the Polish Institute in Budapest the real objects of the Kantor’s productions can be seen: the mannequins at their desks of The Dead Class, the wardrobe, a boy on a bicycle. The Polish curator of the MITEM, Justyna Michalik theatrical historian who has made arrangements for several Kantor exhibitions in Poland and internationally as co-worker in Cricot published a monograph about Kantor’s happening-period in 2015. The opening ceremony of the exhibition will take place at 6pm on April 12. The Metamorphosis –the Tadeusz Kantor’s Theatre round table discussion dedicated to Tadeus Kantor’s art will be held from 3-6pm on April 15 with the participation of several Hungarian and internationally renowned researchers. 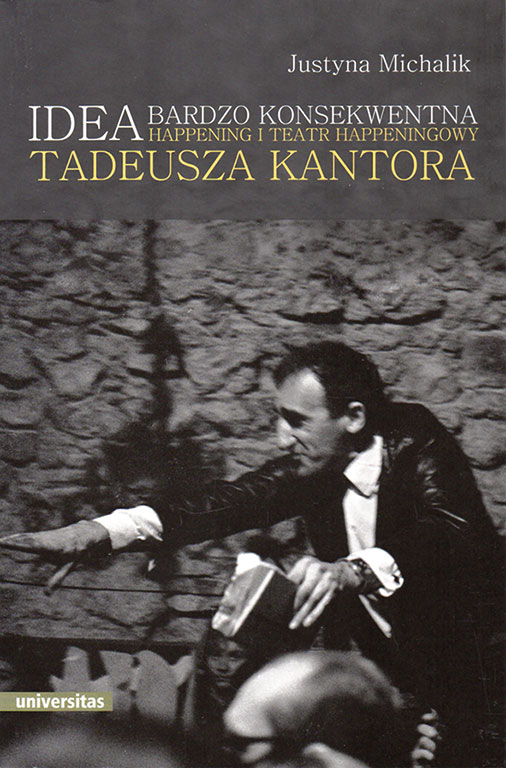 This year’s MITEM is to see Tadeusz Kantor’s retrospective exhibition. The author of the essay which wishes to attune to the event, Nina Király, was a visiting professor at the department of theatre studies at the Jagiellonian University in Krakow between 1984 and 1990, and was a personal acquaintance of Tadeusz Kantor, preparing for his three last productions during those years. The essay reveals that she, in collaboration with László Beke, edited Kantor’s texts and had them published in Hungarian under the title Halálszínház (The Theatre of Death) by the MASZK Egyesület (MASZK Association) in Szeged in 1994, with the cover illustration and the main title of the volume by Kantor himself. Now, as the organiser of the extensive exhibition at MITEM, the theatre historian provides important information chiefly on the reception of Tadeusz Kantor in Hungary.

Previous article Next article
Go to the top